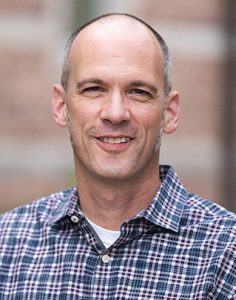 What is your area of research or expertise that you bring to the Landscapes collaboration?
My research is rooted in the study of social movements, but with a focus on the systems of control that respond to those movements, by repressing or otherwise channeling activism to maintain the status quo. These days, my central focus in that work is on the organization and legacy of historical racialized violence and control. I aim to think broadly about the institutions that constitute and reproduce such networks of control, and so the systemic emphasis of the Landscapes project fits closely with this approach.

What do you find challenging or exciting about interdisciplinary collaboration?
While I have focused in past work on what I’ve thought of as the broad legacies of historical violence, most of those effects have been confined to political and criminological realms — such as how past conflict affects contemporary partisan polarization and violent crime rates. This project’s effort to conceive how such violence extends to health outcomes and disparities seems a powerful and important extension of that work, and so I feel fortunate to be collaborating with folks whose research on health inequities I’ve admired for a long time. Even though demography is a core focus in my home discipline of sociology, for a long time I viewed the concerns and approaches that demographers adopt as quite distant from my sociological “home.” But at WashU, I have had the good fortune of collaborating with Landscapes co-investigator Hedy Lee, whose work has helped me to grasp the important intersections between demography and the fields to which I’ve been more closely connected.

What’s one common misconception about your area of research that you’d like to dispel?
The assumption that what I study — which encompasses the KKK and other forms of organized white supremacy — is a phenomenon confined to the distant fringe. The question I hear most is “I don’t know how you can get yourself to study the sorts of people that you do.” But to the contrary, I’ve always seen entities like the Klan as a window into broader systems — a brand of organized racism that emerges and flourishes when and where they do because mainstream officials and entities open space for them to do so. In that sense, most of what I attend to isn’t distant at all — you can’t understand the role played by the KKK historically without also focusing the seemingly routine work of official bodies like school boards, city councils, police departments, and coroner’s offices that constitute the locus of racialized control. At a time when racial violence remains regularly and terribly present, we can’t afford to maintain an idea that racist extremists represent the whole of the problem.

What’s the academic path that brought you to where you are now?
I majored in Civil Engineering and English as an undergraduate at the University of Connecticut, and so it’s been a long journey to say the least! I ended up applying to Sociology PhD programs without ever having taken a Sociology class, based largely on my sense that this direction — unlike engineering — would be a way to study issues that seemed increasingly pressing to me. But as a first-gen student at a large state university who lacked close advisors, I mostly dove into that transition on my own. I was incredibly naive in retrospect, as I didn’t really understand what characterized sociology as a field, beyond the issues that some sociologists studied and that resonated with me.

The root of my particular interests related indirectly to my time as a distance runner on the cross country and track teams at UConn. While away at a track meet one weekend I decided not to join my teammates on some likely ill-advised after-hours adventure, and instead back at the hotel stumbled upon a book one of them had brought about the FBI’s counterintelligence programs in the 1960s and 1970s. I had never heard of COINTELPRO at that point, and — while at the time I wouldn’t have been able to articulate how this might unfold — one thing that I did correctly assume is that this kind of topic could be a subject of sociological inquiry. I ended up writing my dissertation at UNC-Chapel Hill on the organization and impact of FBI efforts to repress a range of social movements. One of their targets was the civil rights-era KKK, which became a focus because my advisors noted that this would offer comparative leverage on the FBI’s action against a wide range of left-wing organizations. It turned out that FBI agents had a clear-eyed understanding of the motivations of the KKK — in large part because klansmen’s anticommunist, patriotic, and racist worldviews aligned closely with those of the Bureau — which offered a window into the workings of the civil rights-era KKK, which became the topic of my second book. From there, I became interested in the legacy of racial contention and violence, which leads to the sorts of lens that I’m trying to bring to the Landscapes project.

If you had the opportunity to get one question answered by an omniscient being, what would you ask? (this is meant to be a lighthearted question–we’re trying to get to the heart of what you are most curious about, whether within your field of research or beyond! Feel free to think big!)
This is less a question, and more a data-related lament. Most of the historical work that I do is archival in nature, which poses particular challenges when much of what I’m interested in discovering is intentionally bounded out of the written record. I’m no proponent of increased surveillance, but given a degree of omniscience I would want to be able to be present in the rooms in which key things happen (please excuse the inadvertent Hamilton paraphrase!) that escape the documentary record. Details on more recent events of this sort can sometimes be gleaned through interviews, and otherwise as a proxy I tend to get interested in the spaces and places associated with my cases of interest. I’ve been known to travel several hours to see such places, such as the day I drove across North Carolina to the tiny town of Plymouth, site of a terrible, and thankfully unrealized, KKK plot to violently sabotage a voting rights march in 1965. Absent my wish of omniscience to access the discussions of the plotters and marchers themselves, seeing the space in question helped to envision and assess dynamics associated with the purported action. Even though in most cases such experience won’t directly make it into the papers or chapters I’m writing, I try to retain an optimistic sense that, ideally, gaining a feel for spaces of interest establishes some basis for understanding related cases and events — and on occasion even empirically refuting a given understanding based on what I’m able to observe!

Anything else you want to share?
Just a thank you for bringing increased attention and insight to this work!